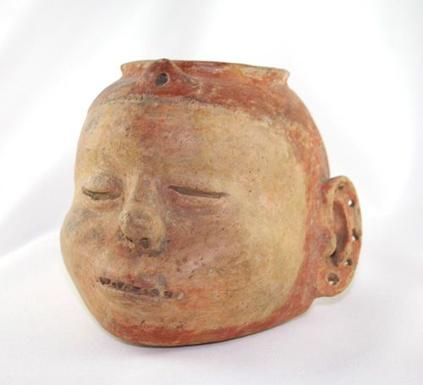 For more information on head pots, be sure to get a copy of Dr. Cherry's book The Headpots of Northeast Arkansas and Southern Pemiscot County, Missouri 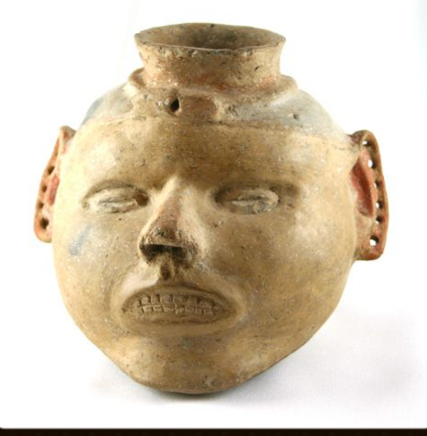 Head pots are considered by many collectors to be the best of the best, and the rarest of the rare when it comes to Native American pottery. Made during a short time period at the end of the Mississippian cultural period around 1300-1500 AD, the realism of the these effigy pots highlights how far the artistic ability of the Mississippians evolved.

Head pots are thought to represent the deceased, and based on the closed eyes, open mouth and eerie appearance, I would agree. I am fascinated by the detail that went into the design of the mouth and teeth. The ear piercing holes are also intriguing, especially when you think about some of the ear ornamentation that is associated with this time period.

The head pot pictured at the bottom left is one of my favorites.  I have looked at and studied it  dozens of times over the last few years trying to figure out what about it makes it so eerie looking. What I finally concluded is that to me, the facial features were intentionally made to represent trauma. When looking closely at the eyes, you will see that one eyelid area is swollen, while the other is not. On the same side of the face, the nose has been pushed over. The cheek area on the same side is a bit more pronounced and rounded, as if to also appear swollen. It makes me wonder if this was done to simply further the deceased appearance - or if it was an actual representation of a trauma that the deceased may have incurred causing his demise.

The suspension hole that is visible in the tab centered on the forehead is thought to have been used to tie on some additional ornamentation rather than for use as suspension.

Both of the pots shown here are on display at the Museum of Native American History in Bentonville, Arkansas.

I hope you enjoy looking at the pictures, and appreciate the artistic achievement they represent.