Of the millions of artifacts that have been collected over the years, a few are so exquisite they become well known throughout the artifact collecting community. Many of these rare few artifacts take on their own name along the way as a tribute to their individuality and rarity. Examples of this would be the Sweetwater Bi-face, one of the thinnest and largest blades in existence - or the Rinehart Dove, a massive Dovetail knife that will have Dovetail collectors drooling for decades to come. Another such example of the personification of an artifact is the artifact pictured here, known for obvious reasons as "Old Scarface". 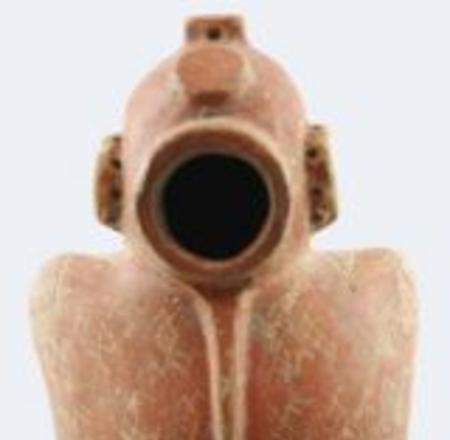 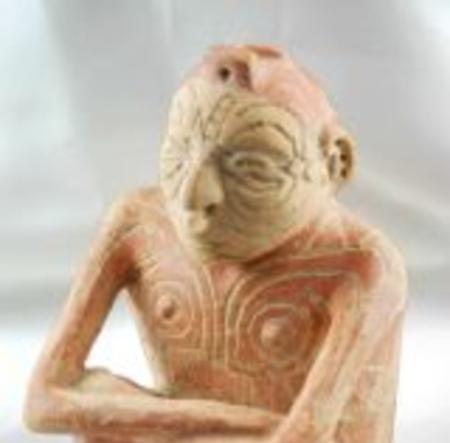 This photo shows to what great extent the scars covered the body, including the arms, shoulders, chest and stomach areas.

This photo clearly shows the back of this person acted as a large human canvas for a variety of geometric style designs.

Old Scarface is in the collection of Mr. Charlie Wagers in Ohio, and recently I was honored with an invitation to view this magnificent collection with permission to photograph some of the artifacts for my upcoming books. While I was at Mr. Wager's, I was amazed and intrigued by many of the super relics this collection houses, and I was able to obtain some great photographs for the Bannerstone Artifact book I am completing for the late Lar Hothem - yet - while I was there, I just couldnt leave Old Scarface sitting on the shelf. While the main purpose of the visit was to photograph bannerstones and atlatl hooks, standing only a few feet away for the display case that housed Old Scarface was too much to bare. Towards the end of the evening, as I was finishing shooting photographs of some wonderful bottle banners and composite atlatl hooks, Mr. Wagers invited Old Scarface out of his case for a short visit. As I held him and turned him over in my hands, I was amazed at the amount of detail that was put into this centuries old work of art.

Body scarring, a form of tattooing among natives was done not only in America, but has been practiced in many other countries as well and continues within some remote tribes on other continents to this day. While occasional finds have revealed evidence of scarring by cultures associated to the Mississippian time period, Old Scarface truly opens a window into the past by showing to what great lengths this body art sometimes took.
In the above photo, I find the design of the facial features and the construction of the head unquestionably tied directly to the makers of headpots. Notice the thin lips, slotted eyes, peirced ears and the squared perforated protusion at the top of the head - all traits seen on most Native American head pots. Another stylization link to headpots from this cultural time period is the coloration split at the top of the forehead.

Since no written record is available for study or referencing such designs made during the Prehistoric, we can only speculate as to the meaning of the shapes and design styles, but there can be no doubt that many of these designs must have held some significance in ancient times warranting them to have been carved into ones body.

I wish to once again express my thanks to Mr. Wagers for the exciting and fun visit we had, and hopefully the next time I stop by to shoot some photos he will allow me to feature another one of his superb artifacts. 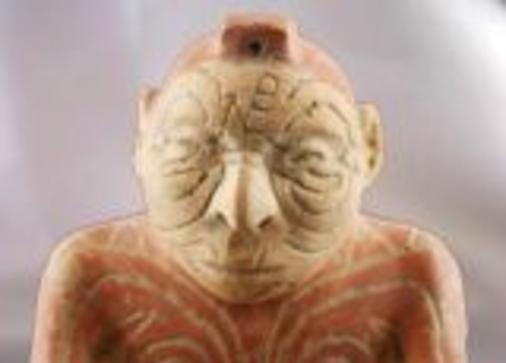