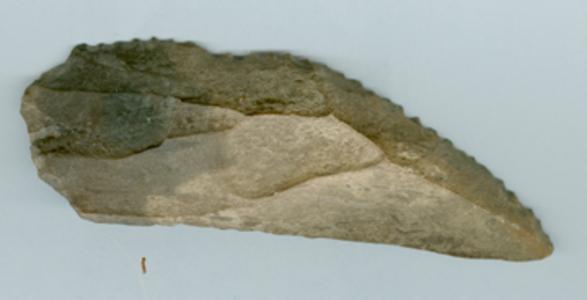 I have only come across a few examples of what are called "Flint Saws" in the last decade or so, but I know that many are out there. Saws Saws can be bifacially flaked, but most often are made off a large spall or flake and unifacially flaked from one side.

While uniface knives are often associated with the Paleo culture, the truth is that uniface tools of all shapes and sizes have been found in every cultural time period. What distinguishes a saw from other uniface knives and scrapers is the large, widely spaced serrations along the cutting edge.

When I first became introduced to this tool type, I had assumed it would have had a use such as cutting slate or some other very hard material due to its design as a hand-held tool, where a high degree of down-force could be directed to the cutting edge. However, while all of the examples I have handled thus far have exhibited wear on the tips of the serrations, none appeared to have ever been resharpened like you would normally see along the edges of other styles knives. Also, saws usually are devoid of heavy damage to the serrations, which makes one wonder if these were actually used for cutting softer, rather than harder material.